Thank you for visiting this website to find out more about the proposed Warrington Western Link (WWL). The proposed WWL will link the A56 Chester Road in Higher Walton with the A57 Sankey Way in Great Sankey. You can view the route under the 'Proposed Route' Section.

On mobile phones, some of our text may not fit on your screen, you can scroll within each of these boxes to read more.

As you scroll down, you will be able to read about why the scheme is being proposed and how the link road will improve traffic congestion in the Borough. Each section will outline and explain a different aspect of the proposals, such as the many benefits of the proposed WWL for local residents and businesses.

As a major infrastructure proposal, it is essential that residents, businesses, and other stakeholders are given the opportunity to view the proposals and provide their feedback. The current Coronavirus related restrictions do not permit traditional public exhibitions to be held. In view of these restrictions, we have developed this online engagement so that you can:

The boundary of the proposed route is shown outlined in red on the Map.

Warrington Borough Council is committed to improving Warrington for the benefit of residents, businesses, and visitors. Over the last 10 years, Warrington has experienced significant growth which has led to increased traffic congestion.

The Department for Transport has awarded the Council funding to develop a business case for the new WWL.

In 2017, a public engagement exercise was conducted on numerous proposed routes for the WWL to help identify the preferred route. Following the feedback received from the public engagement exercise, as well as technical assessments undertaken, the scheme, formerly known as the Red Route, was chosen as the proposed route. All of the routes the Council consulted on were reviewed in a multi‐criteria appraisal known as INSET, which matches the Department for Transport’s appraisal guidance. This considers factors such as the design, cost, deliverability, equality, environmental impact, and social impact as well as the public engagement response, cost‐benefit analysis undertaken and other factors. This route performed best based on this appraisal process.

In 2019, the Department for Transport informed the Council that the scheme had been conditionally awarded £142.5 million. The total estimated build cost is £212 million. Warrington Borough Council’s Cabinet agreed to accept this offer in 2019. A major scheme business case is now being prepared and will be submitted in late 2022.

Since the last public engagement period, we have made a number of changes to the proposed route. We have taken on board comments we received and have improved the scheme.

These changes are summarised below:

The proposed WWL will link the A56 Chester Road in Higher Walton with the A57 Sankey Way in Great Sankey. 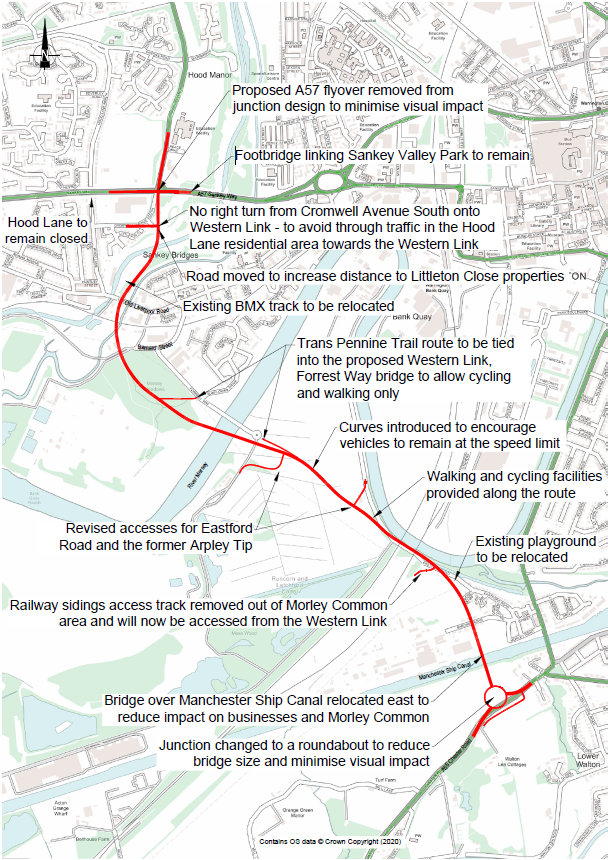 The Warrington Western Link represents significant investment in our Borough. The proposed Western Link will bring many benefits to local residents and the local economy. The objectives of the programme, as detailed in the Outline Business Case to Department for Transport, are to deliver the following:

In achieving these objectives, we are confident that the following benefits will be delivered:

Feedback and Next Steps

Thank you for taking the time to view this virtual exhibition for the Warrington Western Link proposals. You can provide feedback to us in the following ways:

All comments should be received by 23rd December 2020.

Thank you for taking the time to visit the Warrington Western Link Website.

The public engagement period has now closed. You can still visit the pages of this website to learn more about the plans for the Warrington Western Link road.